Home / Infertility Tests – Why am I not getting pregnant? / Ovarian Reserve

The ovarian reserve is an indication of how fertile you are as a woman. It roughly translates into the ability of your ovaries to release eggs that can fertilise and produce babies. This, and a woman’s age, are the best indicators we presently have of a woman’s fertility. In a world where women are delaying childbearing, this test is rapidly becoming the single most important assessment of female fertility potential.

The ovarian reserve is a term used to describe the fertility potential of the woman in relation to her eggs. A woman’s fertility declines as she ages and this is due to the fact that the number and quality of eggs in her ovaries decreases. This translates to reduced ability to become pregnant and higher miscarriage rates. Ovarian reserve testing is therefore central in our assessment of a woman’s fertility potential.

A woman is born with all her eggs and as she goes through life, uses them up until they are finished. When this happens, she of course stops ovulating (releasing eggs) and her periods also naturally stop. This is menopause.

This is unlike men who keep producing sperm (millions daily!) until very late in life so they are able to maintain their ability to father children.

Although the ability to achieve a pregnancy and give birth decreases with increasing age, every woman differs in her ability to do this.  The ovarian reserve tests will accurately estimate your potential.  Several tests have been described but the two most widely used are:

FSH (Follicle Stimulating Hormone) is the hormone that causes your egg to develop from its resting state (it’s been “resting” since your birth!) till ovulation. If you are fertile, your brain needs to produce only a small amount of FSH to cause an egg to mature. Rising or high levels of FSH suggest that the eggs are very few or not responsive and in turn a sign of reduced fertility.

An ultrasound performed in the first few days of the menstrual cycle allows us to count the number of small follicles (“resting eggs”) in the ovary. These small follicles are called antral follicles and the number seen reflects the number of eggs left in the ovary. A fertile woman has a good number in her ovaries and as she ages, the number becomes less. This test is best done by an experienced fertility specialist. The graph shows how follicle numbers fall from birth till they finally are all used up at menopause. 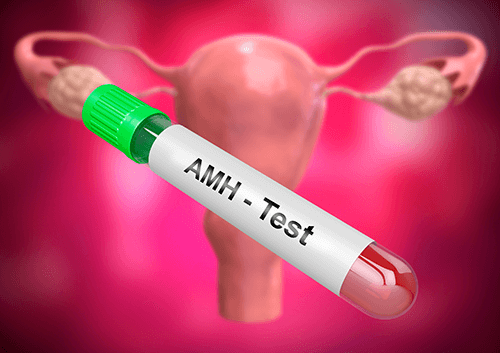 When both these tests are done in combination, i.e. scans and hormone tests on the same day, they can accurately establish your fertility.  More recently, a newer test has become available:

This is a protein that is produced by the developing egg. The more eggs you have in the ovary, the higher the level. Conversely, very low values indicate very low egg numbers and fertility.

These days many women are using ovarian reserve testing to determine their fertility potential. The test results of both AMH and FSH can be obtained in 10 days. If you wish to have this done, please make an appointment to come in during your menstruation.